In Honor of the Battle of Puebla 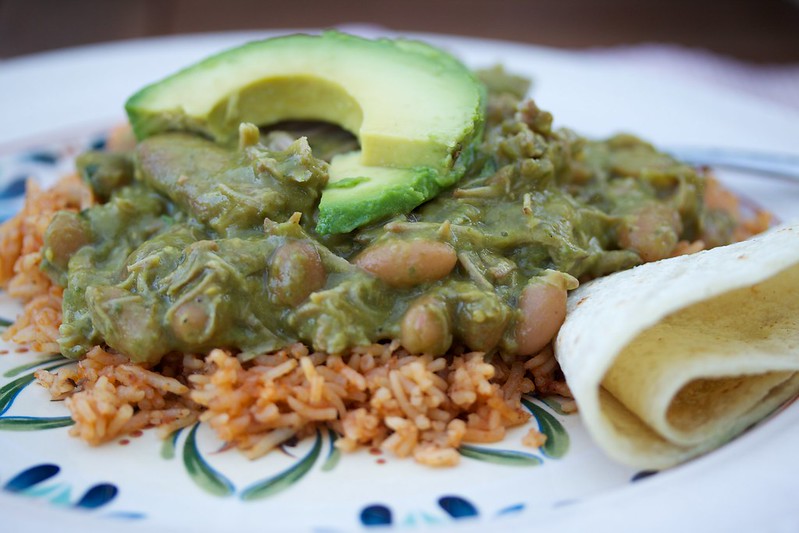 B & I decided it might be fun to go through our embarrassingly large cookbook collection and make a meal of “new recipes”. Out thought was that we would do it once a month and alternate which one of us made dinner. Spoiler alter, this idea didn’t really take off after this first meal (not really sure why).

For my first “new recipes” meal, I decided to go for some Latin inspiration.

One of B’s favorite dishes is chili verde.  There’s this great Mexican restaurant in town called Maria’s Cantina that does both fabulous carnitas and chili verde. As I already make a pretty mean carnitas, I thought this would be a good opportunity to play with the chili verde. Turns out the dish is New Mexican, not Mexican, which is why Rick Bayless refers to it the way he does.

Preheat oven to 275. Toss the pork with the Worcestershire sauce.  In a dutch oven, brown the pork pieces in a little vegetable oil in batches to avoid overcrowding the meat.

Remove the meat.  Add the tomatillos, garlic, jalapeños and half of the cilantro. Sprinkle with 1/2 tsp. salt.  Put the pork back over the vegetables and cover.  Cook for 2-3 hours, checking every hour or so to make sure there is still liquid in the pot.  Use the bean liquid if you need to add more.

When pork is “fork tender” remove it from the pot and blend the vegetables and liquid until smooth using either and immersion blender or regular blender.  Return everything to the pot. Add the sugar and cooked beans.  Cook until everything is warmed through.  Serve with remaining cilantro as a garnish.

Their recipe calls for using canned white beans and a slow cooker, but I like the cast iron dutch oven and the home cooked beans.

I decided to service it over Mexican rice, and though I have to go to the source for those of us who don’t have an abuela, Diana Kennedy.

Soak the rice in hot water for 5 min.  Drain and rinse with cold water and let drain in a strainer for a few minutes.  Heatoil to a cast iron skillet with a lid.  Add drained rice.  Fry  for about 10 min, until the rice just starts to color.  Stir rice to make sure it cooks evenly.  Drain any excess oil.

Blend the tomatoes, onion and garlic until smooth.  You should have about a cup of liquid.  Add the puree and the chicken stock to the rice.  Taste for salt.  Cook covered until the liquid is absorbed (about 10 min).

Remove rice from the heat.  Add a terry cloth towel over the rice and cover with the lid.  Let sit 20 minutes.  Fluff before serving.

Her recipe also suggests adding thin sliced carrots or peas, which would be even better, but this makes a pretty standard version of Mexican rice.

The rice was good, but I have to admit, it didn’t pair particularly well with the chile verde.  We tried it again later over polenta, which was a lot better, but that’s a recipe for another post.

That’s my meal for May.

This site uses Akismet to reduce spam. Learn how your comment data is processed.